As starting the New Year, we are committed to share with you, definitely, the happiest moment for us at the Iranian Cheetah Society (ICS) at the end of 2010 as the Year of Leopard in Iran!

This is the story: Since early 2010, ICS has been producing a documentary movie about the Persian leopard in Iran. Recently, the ICS film crew was successful to capture an impressive long shot of an adult male in Golestanak Reserve! The area hosts intensive research programs on brown bear as well as the leopard since 2005 (you can read about this study on Persian Leopard Newsletter, volume 3, August 2010). After continuous tracking by the biologists, a passive HD camera trap designed by an Iranian technician was quite helpful to trap the animal while exhibiting his territorial behavior. The animal is on a scrape, urinating and defecating, and then it sniffs and licks another scrape, possibly to find a mate! It was a big success for all of us before the end of 2010 as the year of leopard in Iran and encourages our film crew to work much more to produce a prestigious movie.

We would like to thanks you all for any kind of supporting and wish you peace and prosperity this holiday. Season’s greetings and merry Christmas to our in-holiday friends! 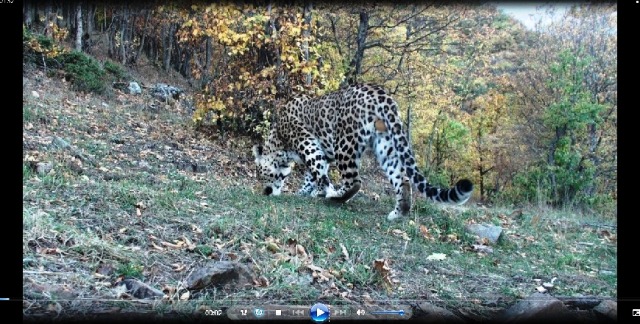 The Persian leopard on the film