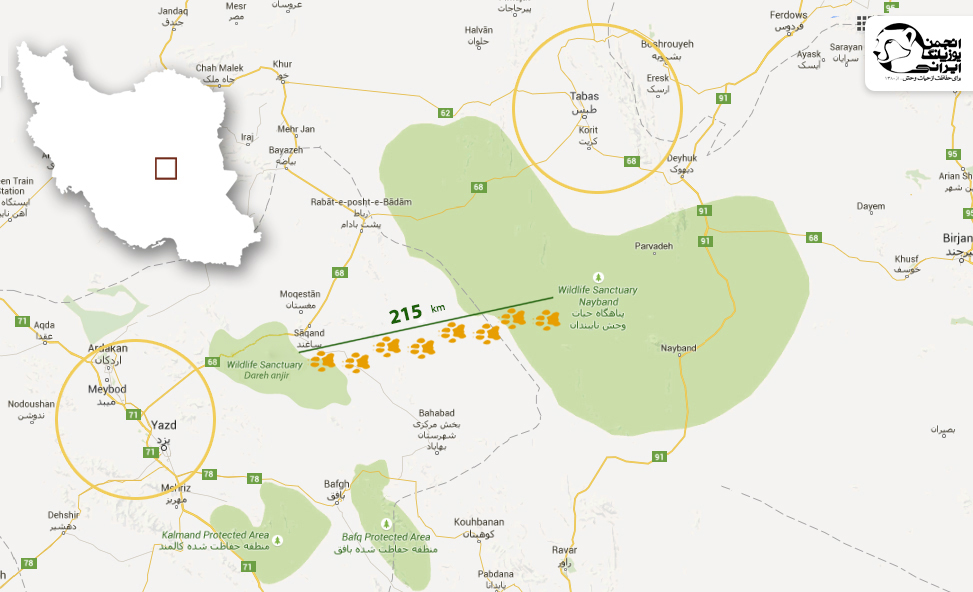 Analysis of new camera-trap pictures captured in some cheetah reserves in Yazd province revealed astonishing results. Researchers from the Iranian Cheetah Society has identified a male cheetah that in late 2014 has travelled more than 215 km across South Khorasan and Yazd provinces!

Long distance movements of the Asiatic cheetah has been documented previously. Researchers from the Society has documented such movements in central Iran in 2013 in a paper published at Oryx, the International Journal of Conservation. Using camera-trap data from surveys conducted between 2009 and 2013, ICS researchers identified an adult female cheetah who moved in multiple occasions approximately 150 km between two reserves in central Iran. Additionally, her cubs after becoming independent, ranged multiple reserves in the three consecutive year of the camera-trapping surveys.

Very little is known about the movement ecology and ranging behavior of the Asiatic cheetah. No information is yet available if this long-distance movement of Asiatic cheetahs are consequence of the recent anthropogenic pressures and habitat fragmentations or just natural consequences of the subspecies’ response to its habitat in Iran. Given the fact that cheetahs in Iran are not confined to the small and isolated habitats inside the protected areas and almost all these reserves are under anthropogenic pressure and are isolated by roads and human infrastructure, stress on a necessity to evaluate the cheetah’s ranging pattern and habitat requirements in Iran, and to identify biological corridors connecting the current habitats in the country.

The Iranian Cheetah Society is running the nation-wide cheetah monitoring project in cooperation with Iran Department of the Environment, Conservation of the Asiatic Cheetah Project, local wildlife authorities on the cheetah reserves.