“Iran is home to the last known population of Asiatic cheetah which once roamed across vast ranges of west and south Asian countries. However, despite enforced protection efforts in recent years, no reliable information was available about the subspecies population in the country which made assessment of conservation measures impossible.

Accordingly, a comprehensive monitoring program was initiated by the Iranian Cheetah Society (ICS) in partnership with Iran’s Department of Environment, Conservation of Asiatic Cheetah Project and Panthera to understand demographic characteristics of the cheetahs in Iran between 2011 and 2013. As a result, a population of 40 to 70 individuals is now concluded for the entire country, fewer than what was already thought, i.e. 70 to 100.camera traps are reliable tools which are applicable for investigating population of elusive marked cats, such as the cheetahs. However, this technology has been rarely applied to the species due to its elusive nature and low density. In Iran, due to political sanctions, necessary equipment are not easily accessible which prevented a thorough status assessment before due to lack of proper number of camera traps. Thanks to various donors and partners, the monitoring program was initiated recently to fill the gap in knowledge which is essential for improving protection. Accordingly, almost 10 reserves within Iran were covered by means of infra-red camera traps to yield a reliable estimation of the cheetah population.

However, since no basic figure is available about the cheetah population for previous years, it is difficult to judge about population trends of the Asiatic cheetahs in Iran. Meanwhile, based on sporadic data available from previous years, it seems that the cheetah population has a decreasing status in recent years, indicting its most critically endangered status ever. Therefore, a comprehensive program is needed to protect the Asiatic cheetahs in the country. As part of its Cheetah Program, the ICS has a broad range of activities to halt the decrease, including training and equipping game guards, stopping overgrazing within reserves, community-based programs, application of genetic methods to understand population composition, etc. It is highly recommended to involved conservation agencies to revise existing protection efforts in Iran in order to safeguard cheetah survival in the country. 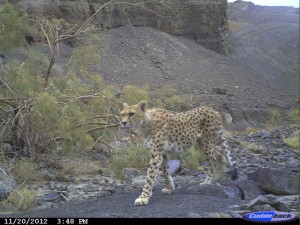 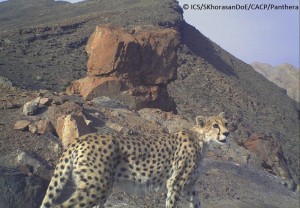 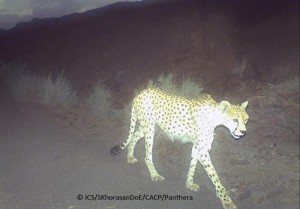