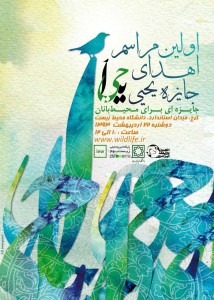 Following its supportive programs toward Game guards, Iranian Cheetah Society (ICS) held the first annual Yahya Prize ceremony in Karaj’s University of Environment(UOE) this morning. This price that sponsored by Mr. Mojtaba Ramzi and his wife Mrs.Paridokht Moshkzad, sculptors and ICS members , will have special subject every year in order to honor game guards. Dr. Fazel the president of university of environment suggested that next year the prize goes to a “researcher game guard”. Morteza Eslami, the president of ICS, in his speech mentioned that in 30 years, 100 game guards were killed in the protected areas, but thankfully last year there were no loss and we are looking forward that by help of people there won’t be even an injured game guard in future.

Mr.Ramzy said that he and his wife will provide this prize by dedicating their artistic products.

At the end of the ceremony the winners received their Yahya prize and some gifts from Mr Saman Golriz and Iranian technical publications.