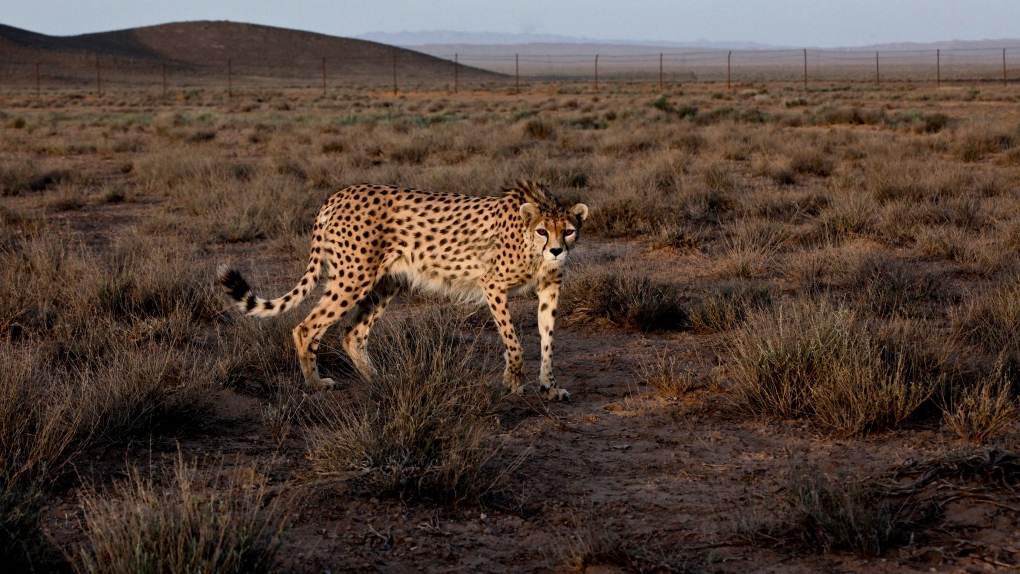 TEHRAN, Iran (AP) — Iran is rushing to try to save one of the world’s critically endangered species, the Asiatic cheetah, and bring it back from the verge of extinction in its last remaining refuge.

The Asiatic cheetah, an equally fast cousin of the African cat, once ranged from the Red Sea to India, but its numbers shrunk over the past century to the point that it is now hanging on by a thin thread – an estimated 50 to 70 animals remaining in Iran, mostly in the east of the country. That’s down from as many as 400 in the 1990s, its numbers plummeting due to poaching, the hunting of its main prey – gazelles – and encroachment on its habitat.

Cheetahs have been hit by cars and killed in fights with sheep dogs, since shepherds have permits to graze their flocks in areas where the cheetahs live, said Hossein Harati, the local head of the environmental department and park rangers at the Miandasht Wildlife Refuge in northeastern Iran.

At the reserve, rangers are caring for a male cheetah named Koushki, rescued by a local resident who bought it as a cub from a hunter who killed its mother around seven years ago, said Morteza Eslami Dehkordi, the director of Iranian Cheetah Society. “Since he was interested in environment protection, he bought the cub from him and handed it to the Department of Environment,” he said. The cheetah was named after his rescuer’s family name.

With help from the United Nations, the Iranian government has stepped up efforts to rescue the species – also with an eye to the potential for tourism to see the rare cat.

Rangers have been equipped with night vision goggles and cameras have been set up around cheetah habitats to watch for any threat. They have also been fitting cheetahs with U.N.-supplied GPS collars so their movements can be tracked. Authorities built shelters in arid areas where the cats can have access to water. They’ve also reached out to nearby communities, training them how to deal with cheetahs and promising compensation for livestock killed by cheetahs to prevent shepherds or farmers from hunting them.

Also, any development projects in cheetah habitats must be approved by Iran’s Environmental Department.

The efforts were given a symbolic boost at the ongoing World Cup in Brazil, where Iran’s team wore images of the cheetah on their uniform. The country has also named August 31 as Iran’s National Cheetah Day since 2006.

Once known as “hunting leopards,” Asiatic cheetahs were traditionally trained for emperors and kings in Iran and India to hunt gazelles. They disappeared across the Middle East about 100 years ago, although there were sightings in Saudi Arabia until the 1950s. They vanished in India in 1947 and ranged in Central Asia as far as Kazakhstan up to the 1980s.

Gary Lewis, with the U.N. Development Program, said the dropping numbers in Iran are alarming.

“There are no other Asiatic cheetahs like the one that you have here in Iran, so it is essential for us as human beings to conserve our biodiversity by protecting this animal,” he said.

Iran also hopes to attract more foreign tourists under moderate President Hassan Rouhani, who has vowed outreach to the West.

“It is an endangered species. The cheetah is considered to be one of the most charismatic cats,” said Vice President Masoumeh Ebtekar, who heads Iran’s Department of the Environment.

“It is important for, for example, our ecotourism when many people who enjoy coming just to visit our natural habitats for the cheetah and to see, to have a glimpse of the cheetah.” said Ebtekar. “So we are working very seriously with international organizations as well as our national specialists and experts to protect this species.”

African cheetahs are also a threatened species, with an estimated 10,000 adults remaining.