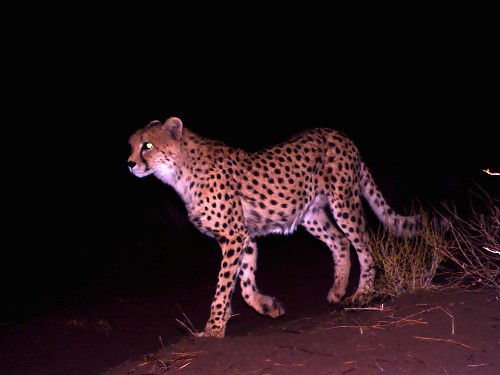 The Asiatic cheetah, scientifically known as Acinonyx jubatus venaticus, is one of the critically endangered big cats in the family Felidae. The species was once distributed across the Middle East and the Indian Subcontinent. The Asiatic cheetah has since been extirpated in most countries in the region except Iran. The population of the Asiatic cheetah is currently fragmented into three subpopulations in the central arid plateau. Conservation experts now estimate that the population of the Asiatic Cheetahs in Iran is fewer than 50 individuals. According to a study published on Cat News, at least 26 different individuals have been recorded by camera traps and directly observed between 2015 and 2017. The northern subpopulation located in the Miandasht Wildlife range or the Touran Biosphere Reserve is the only place with evidence of reproduction. Reproduction has, however, not been observed in the southern subpopulation since 2012, indicating a probable decrease in the range and size of the population. The western sub-population has not had recorded sightings since 2013. There have also been unconfirmed sightings in Pakistan in the Balochistan area, but experts believe that the sightings do not represent a stable or resident population.

Past distribution and population size in Iran

In Iran, the Asiatic cheetah population prior to World War II was estimated to be about 400 with the range of the species, including desert and steppe areas in the eastern half of the country and western terrain near the Iraqi border. After the war, the cheetah populations declined rapidly, mainly due to a reduction of prey, including gazelles that were hunted for bushmeat. In 1956, the cheetah and gazelle were both declared protected by law by the Iranian Game Council. As a result, the gazelle population recovered significantly. By 1959, researchers also observed a significant recovery of the cheetah population, highlighting the intricate relationship between predator and prey. In the late 1970s, cheetah population estimates varied widely with some assessments concluding there were between 200 and 300 individuals while others stuck with conservative estimates of about 100 individuals in the wild.

Areas where Asiatic cheetahs can be spotted

The Miandasht Wildlife Refugeis regarded as one of the best cheetah habitats in the country. The refuge has a plain and hilly terrain with deep watercourses that provide a suitable habitat for Asiatic cheetah. The area also has a sizable population of goitered gazelle, which exists in the scrublands of the refuge, thus ensuring a steady supply of food for the cheetahs. According to the Iranian Department of the Environment, Cheetahs briefly vanished from Miandasht after the 1979 revolution when wildlife conservation efforts were disrupted. It is believed that as conservation efforts began to improve, cheetahs from the neighboring Khar Turan National Park gradually moved back to the refuge and established a resident population. Several locals who made unconfirmed sightings of the animal during that period, however, believe that the cheetahs persisted in the refuge, albeit in smaller numbers, and later increased with the improvement of conservation efforts. The Kahr Turan national park is the second largest reserve in the country. It consists of an area of about 1.4 million hectares. The park’s enormous size and deserts allowed various species to escape poachers during critical periods when humans threatened most species in other protected areas. The park has an estimated 12 to 15 cheetahs that rely on gazelles, wild goats, and wild sheep for sustenance.

The study of the fragmented Asiatic cheetah population requires the use of camera traps, among other techniques. Conservation scientists typically place knee-high camera traps along identified game trails within the sub-species’ home range. The devices are then left for long periods of time, typically months and in some cases years. Such devices are fitted with motion sensors that trigger the device whenever something passes within its range, which is usually between 10 to 15 feet. The devices are, however, incapable of transmitting data. At night images of cheetahs captured at a distance of 15 feet appear spectral, but image quality improves substantially during the day. Images obtained provide vital information that allows conservationists to identify individuals, observe their general condition, and conduct a rough estimate of the number of cheetahs in the area. Direct observation is also used in the study of cheetahs in the country. In the case of the August 2007, Project Asiatic Cheetah in Miandasht Wildlife Refuge Study, the Iranian Cheetah Society used direct observation as a critical method of studying Cheetahs in the area. Other methods that were used by the organization include scat collection and the study of cheetah tracks and kills.

See also  Livestock removed from a 5,600+ hectares area to make it a secure home for Asiatic Cheetah

Threats to the species

Historically human activity has been the main threat to the species. In several Asian countries, including Afghanistan and Turkmenistan, excessive hunting has been blamed for the decline of the species. In Iran, the cheetah’s decline has been blamed on the reduction of their preferred prey due to poaching. Encroachment of cheetah habitat by urban and industrial development has also affected cheetah populations significantly. For example, the nation’s two primary coal and iron mines are situated in regions with the largest populations of Asiatic cheetahs outside national parks. The development of road infrastructure and buildings has made the species more susceptible to poachers. Moreover, it was recently discovered that a significant number of cheetahs in the country died as a result of road accidents.

There are currently several conservation projects in Iran that are collectively helping in the protection of the Asiatic cheetah. The population of cheetahs in the northern habitats of Touran and Maindasht has increased by an estimated 17%. The increase in population has been attributed, in part, to the enhanced morale and vigilance of game guards. International organizations, including UN agencies and the Global Environment facility, have also provided critical funding and backing for projects aimed at protecting the cheetahs. Other measures that have been implemented include the purchase of traditional grazing and water rights from herders in protected areas such as the Touran National park in order to minimize human and cheetah conflict. An innovative community reserve is also being piloted in Yazd province. Public awareness has also been done through the transformation of the Asiatic cheetah into a national symbol. Previously, images of the Asiatic cheetah have been used to embellish the uniforms of the country’s national team.

Challenges facing the conservation of the Asiatic cheetah

Implementing measures aimed at conserving the last survivors of the Asiatic cheetah subspecies has proved to be extremely difficult. In the past, the Iranian department of the environment, which bears the primary role of protecting the nation’s threatened species, has had to cope with budget cuts that severely limit conservation efforts. The challenge has been compounded by heavy international sanctions placed on the country. Over the years, conservationists in the country increasingly found themselves reliant on the UNDP for funding of conservation projects. Deep budget cuts in 2017, however, forced the UNDP to cut funding of the Asiatic cheetah conservation project leaving a substantial financial deficit in conservation efforts.