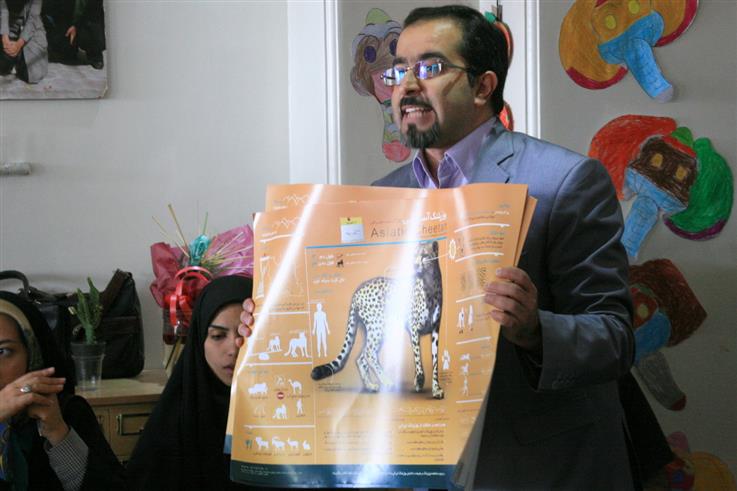 Simultaneously with the Children’s week, Morteza eslami the chief executive officer of the Iranian Cheetah Society with Massoumeh Ebtekar the head of Department of environment of Iran, attended to the child Labor school in state no.12 in Tehran and they narrated stories about cheetah for the kids.

As a part of the ceremony, with the aim of a tribute to Children’s week and to a special sort of Children of Tehran the Work Children, Morteza Eslami introduced the Iranian cheetah to the children. The CEO also told the present some memoirs of the Iranian cheetahs and why protecting these endangered creatures is such a matter.

In this conference, the head of environment of Iran on the behalf of the Government of Hassan Rouhani mentioned the impact of social organizations. “lately, a budget from the government is to be set to support these social enterprises and I hope that it gets official so that these organizations will be trustworthy and be supported by the law.” said Massoumeh Ebtekar.
She also said furthermore:” It is important to boost in protecting the WildLife and hopefully these improvements will be made by the corporations of Environmental societies, social organizations especially children and Iranian Environmental Department.” It is worth noting the tribute ceremony following the global children day, was held on October 2nd by Child Labor organization and Tehran’s Environmental Protection Society’s assist. The CEO’s assistant, the Deputy of CEO and the head of Tehran’s Environmental Protection Society and other staff were present as well.
Source: WildLife database -Iran Student Correspondent Association