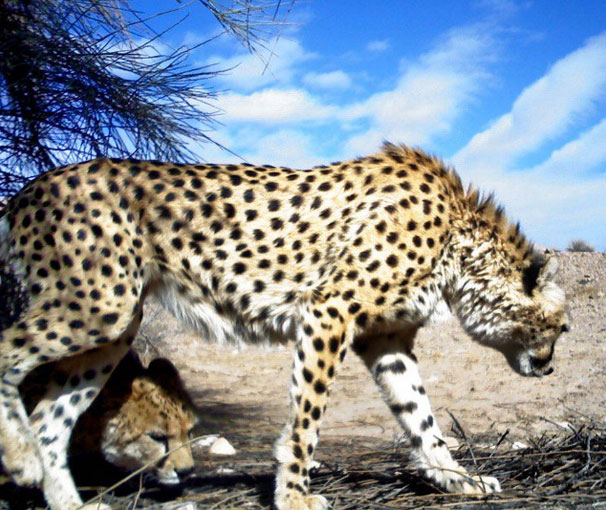 Recent nation-wide camera trapping of cheetah reserves in Iran suggests a population decline in the southern habitats.
Houman Jowkar, the National Manager of Conservation of the Asiatic Cheetah Project (CACP), stated in an interview with the Iranian media that “the second phase of the cheetah monitoring project focuses on local community-based approaches for the sake of the species conservation.” Jowkar added that the Iranian Cheetah Society (ICS) is running the national project for the cheetah population assessment in Iran.

While the last population assessment of the Iranian cheetahs was conducted in 2012, the current initiative has began from the southern reserve, with the Naybandan Wildlife Refuge, South Khorasan province, as the first reserve which has been surveyed in 2014. The camera-trapping survey will be continued in Bafq Protected Area, Darreh Anjir Wildlife Refuge, Siah Kuh National Park, and Ariz, all in Yazd province.

Jowkar noted that “current data suggests a population decline in the southern reserves, whereas a large population of cheetahs has been so far detected in the northern reserve, namely Miandasht Wildlife Refuge, North Khorasan province, and Touran National Park, Semnan province.” “The second phase of nation-wide population monitoring of cheetahs will allow us to compare the new data with those of older figures, so a more realistic picture of the current status of cheetahs in Iran can be drawn” Jowkar added.

Further, Navid Gholikhani, the ICS’ project leader provided more information about the project objectives and future plans. “Our goal is to survey all the cheetah reserves in Yazd province simultaneously” Gholikhani said. He added that “the former camera trap survey resulted in photo-capturing of 22 different cheetah individuals in the cheetah reserves, thus, combined with opportunistic observations and field reports, a population of 40-70 cheetahs will be our best guess for Iran.” However, the camera-trapping survey need to be optimized based on a systematic approach allowing more robust analysis of camera trap data. Gholikhani stated that besides the critical population data received from the national survey, “involving local wildlife authorities and warden in the cheetah monitoring project has helped to increase conservation actions on the ground, thus indirectly benefits the cheetah conservation efforts in the country”.