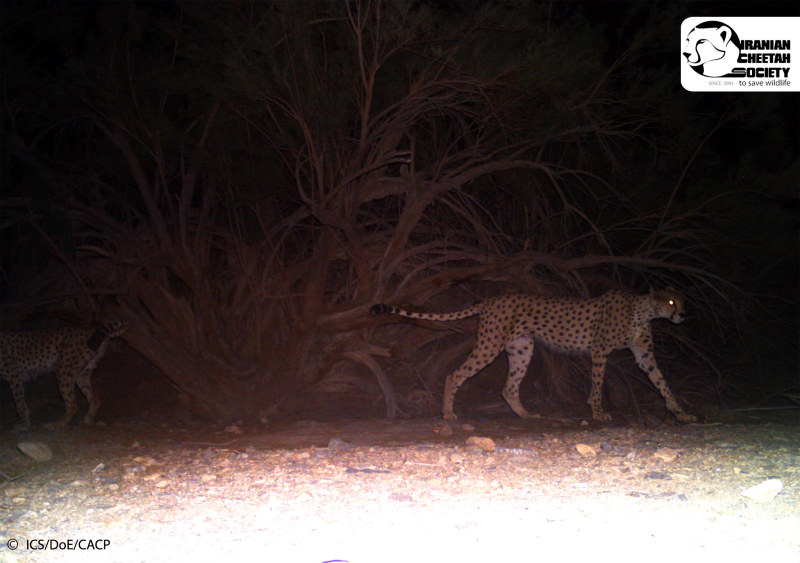 New data obtained during the third phase of nation-wide cheetah monitoring program confirm the persistence of a male cheetah coalition we previously identified in 2012 in Darreh Anjir Wildlife Refuge, Yazd province.
Within this phase of our intensive field surveys in the south-central and central Iran, during late May-July our team employed 50 remotely-triggered camera traps across key cheetah sites in Yazd province, including Darreh Anjir Wildlife Refuge, Bahabad No-Hunting Area, and two sites outside the current network of protected areas. Our goal is to monitor the status of cheetah individuals we have identified since 2012 surveys, and to investigate if any female cheetahs remain across the cheetah range in Yazd province.
After more than 2 months of camera-trapping surveys, about 270000 photos have been obtained. Preliminary analysis of the cheetah photos confirms the persistence of 4 male cheetahs known to us since 2012, including a male coalition of three cheetahs we named as “Ardalan”, “Arsalan”, and “Ardavan”, and “Hominu” a lone male cheetah. Unfortunately, neither any female cheetahs nor any sign of reproduction has been obtained in our camera-trapping effort.
The Iranian Cheetah Society is now extending the monitoring program into Naybandan Wildlife Refuge, South Khorasan province, and will then continue with surveying Miandasht Wildlife Refuge in north-eastern Iran. Our works is done in collaboration with provincial offices of Iran Department of Environment and Conservation of the Asiatic Cheetah Project (CACP).