As a Critically-Endangered subspecies of cheetahs that only persist in Iran, the Asiatic cheetah (also known as the Iranian cheetah) is very popular today. Asiatic cheetahs are considered as a national symbol for Iranians, the only nation that is proud being able to save these charismatic cats from extinction in Asia. However, the Iranian cheetah population seems to be in serious trouble, and new evidence suggests that in spite of ongoing conservation efforts, this population has been declining during the past years.
The year 2001 was a milestone in cheetah conservation in Iran. The Conservation of the Asiatic Cheetah Project (CACP), an initiative between Iran’s Department of Environment, UNDP and a number of international partners, as well as the Iranian Cheetah Society (ICS) were formed with the goal to reverse the Iranian cheetah extinction. When we at ICS started our very first conservation-based efforts, very little was known about cheetahs in Iran. Throughout the past decade, new information started slowly flowing. New cheetah habitats and conservation plans began. The number of game wardens in cheetah habitats has been almost doubled. Remotely-triggered camera traps were imported to Iran for the first time and intensively employed for detection, and after several years of monitoring, of local cheetah populations. Different attempts have been carried out to assess the status of cheetahs in Iran. Several community-based projects have been conducted in villages and human settlements inside or in periphery of critical cheetah habitats. Either big or small, several national and local partners have joined the efforts to help conserving cheetahs in Iran. Additionally, 31st of August has been named as “National Cheetah Day” in the country to celebrate the persistence of Iranian cheetahs, and to stress the need to continue conservation efforts. By adding the Asiatic cheetah on the jersey of Iranian national soccer team, a new awareness campaign went throughout the country, and now there is a strong desire among Iranians to conserve their Critically Endangered cheetahs.
Without the conservation activities launched in the last 15 years the Asiatic cheetah would probably go extinct today. Nevertheless, we at ICS believe that much more is needed to be done to secure the cheetah survival in Iran. This year we celebrated the 10th anniversary National Cheetah Day in Iran, but we are sad to confirm that the Asiatic cheetah status is worrisome.
Since 2011 with the cooperation of CACP and provincial offices of Iran Department of Environment, we launched the Nation-wide Cheetah Monitoring Program in Iran. By this large-scale initiative we aimed to assess the status of cheetahs in Iran, and to provide for the first time scientifically-sound estimates of the population size and trend in their last stronghold. Using intensive camera trapping surveys across multiple cheetah habitats, we identify cheetah individuals, and by repeating the survey each year, we hope to monitor the population status and trend. The first phase of this project was done in 2011-2013. The second phase was carried out in 2014-2015, and presently we are busy with the third phase, which is expected to run until mid-2017.
During the first phase, we identified 20 different cheetahs including 11 males, 7 females, and 2 cheetahs of unknown sex. Based on the size of the area cheetahs living in Iran, almost one-third of the country or approximately equal to the size of France, the monitoring of Asiatic cheetahs is extremely challenging. Given our data, we guesstimated that between 40-70 cheetahs may live across their entire range in Iran. Since then, we have attempted to monitor all the identified individuals, some of them are still photo-captured by our camera traps inside the cheetah reserve. We confirm that preliminary results from the third phase, in combination with the data collected during the second phase and one study in Kavir National Park, are a source of major concern. Since 2013, neither cheetah reproduction nor any female cheetahs have been recorded in cheetah habitats in south-central Iran. During the past three years, we have been able to document the presence of only 4 male cheetahs in the cheetah reserves in Yazd province. We are truly concerned as Yazd province was used to be a hotspot for cheetahs in Iran, and several reproducing cheetahs were known to persist inside this province. 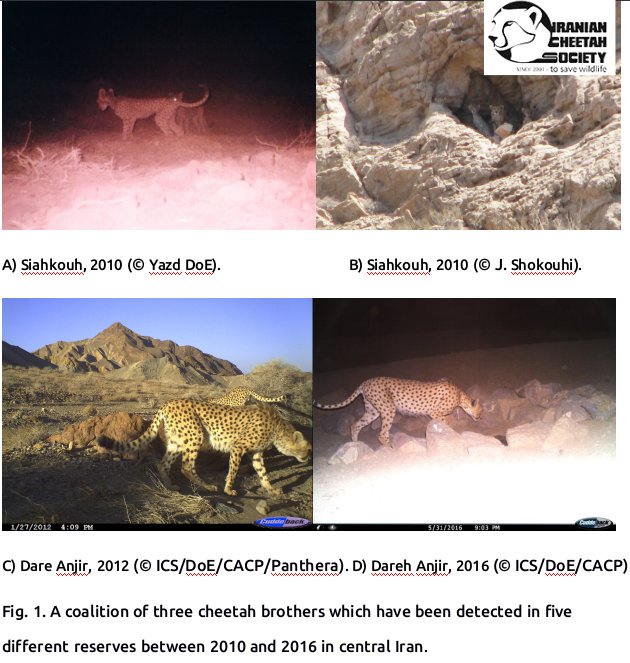 Given the available data, it is very likely that viable cheetah populations are now limited to only four area: Miandasht Wildlife Refuge in North Khorasan province, Touran Biosphere Reserve in Semnan province, Naybandan Wildlife Refuge in South Khorasan province, and, possibly, Darband-e Ravar Wildlife Refuge in Kerman province. We accept that providing reliable estimates of cheetah population size, effective population size, and reproducing females are currently impossible. Also, for a better picture of the current status we have to wait until surveys are finished. However, so far only two female cheetahs are captured using our camera traps. We stress that it does not mean that only 2 females persist in Iran. We also guesstimate that currently the size of the Iranian cheetah population may not exceed 40 individuals. Given the extremely small size of the Iranian cheetah population, and the fact that these number are also divided into smaller local population divided into habitats some of them are hundreds of kilometers apart, loss of even one cheetah would have a catastrophic effect on the survival of the last remaining Asiatic cheetahs.

Since 2001, we are aware of at least 48 cheetah mortalities in different incidents in Iran, including 34 confirmed evidences containing hard documents. Out of these incidents, only 7 cheetahs are likely to have died because of natural causes. At least 21 cheetahs have been killed by shepherds, as well as 15 cheetahs have been killed in vehicle collisions. There is also evidence of at least 5 cheetahs being killed by poachers.
We have recently shown that Asiatic cheetahs disperse greatly across multiple reserves. This nomadic lifestyle is extremely important for the persistence of Iranian cheetah population, as these immigrations might reverse local extinction for such small wildlife subpopulations. On the other hand, continuous cheetah movements and their unpredictable movement patterns make their conservation extremely difficult. Many human areas, roads and railways exist between cheetah habitats, some of them trespassing the cheetah reserves, which might lead to the loss of more cheetahs. Therefore much more extensive efforts must be made at the same time to protect the remaining cheetahs. We are still hopeful in conservation of Asiatic Cheetahs, but we believe that all national and international partners must play a bigger, and more active, role to safeguard cheetahs in Iran.
We have launched an online petition to ask President Hassan Rouhani to order immediate implementation of several protective measures, most importantly by pushing governmental bodies to cooperate with the Department of Environment. So far more than 5000 Iranians has signed the petition, and hope that this petition will provide a much needed political will and support for conservation of the Asiatic cheetah in Iran.