The Asiatic Cheetah is a species with continuous movement. According to ICS’s data recorded throughout the 3 phases of the Population Monitoring Program, this animal can move over 200 kilometers in just a few months. Therefore safe corridors are of high importance in conserving this species. A significant portion of cheetah mortality also occurs in these areas.

The ICS is trying to observe the presence of cheetahs in these habitats through the “Explorers of Hope” Project. Based on habitat suitability modelings, these habitats are of high desirability and importance for the species or have recorded cheetah signs in them.
One of those areas is located in the province of South-Khorasan. A critical and the only corridor for the movement of the species from Naybandan wildlife refuge towards Semnan and Razavi-Khorasan provinces.

Received information claim that the South-Khorasan Department of Roads and Urban Development is planning to construct a new road in this area, connecting Bajestan to Boshruyeh. The department has also announced that the project is awaiting the permission of the Department of Environment.

According to the Iranian Environment and Wildlife Watch news agency, the South-Khorasan DoE has sent the plan to the office of Habitats and Protected Area Affairs in the central Department of Environment for confirmation. Concerning the importance of the issue, the ICS has sent a letter to this office regarding the potential threat that developing this road will make to the extremely endangered species of Asiatic Cheetah. We hope this department will strictly reject this plan; otherwise, the only possible connection point between southern and northern habitats would be disconnected by a 4-laned Road. We will stand against this project to make sure it will be canceled.

The official correspondence of ICS with DoE confirms the rejection of the road plan, as it is capable of destroying two protected areas. 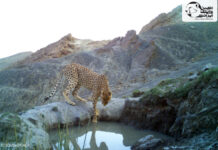 ‘Arash’ and ‘Pouyan’ are still roaming in Naybandan