Recently, camera traps recorded a family of three consisting of a mother and two cubs at several points in Turan National Park. The family was spotted by rangers three months ago, and new photos show the well-being of both cubs during this time. The mother of these cubs is named “Mother of Talkhab”*, a powerful cheetah who successfully raised three of her cubs in recent years. It should be noted that camera traps have also recorded other cheetahs during this period, and the result of their identification will be announced later.
Camera traps recorded these promising images in the Annual Asiatic Cheetah Population Monitoring Program. This year, we simultaneously assess the status of the Asiatic Cheetah population in Turan Biosphere Reserve and Miandasht Wildlife Refuge. This study will continue until mid-autumn this year. We hope to identify more families in the area by then.

See also  Explorers of Hope: New habitats to be surveyed for Cheetah presence 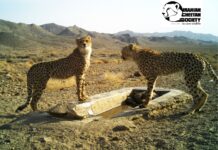