Recent camera trapping in central Iran indicates that an old Persian leopard roams in Bafq Protected Area, estimated to be at least 12 to 14 years. This adult male was first recorded by camera traps in late 2004 which was a prime individual at that time. Later, he was photo-trapped regularly and he was the main star in occasional encounters with game wardens and visitors, based on spot patterns comparison. In 2007, he was equipped with GPS collar for six months by CACP, WCS and Panthera, covering most of this 850 square kilometer reserve.

Last year, the animal was still a dominant male roaming most of the reserve, indicating that he is the oldest ever identified Persian leopard in the wild.Large cats normally live no longer than 10 years in the wild, despite their significantly longer lifespan in captivity (sometimes up-to 25 years). Bafq Protected Area which is one of the main hotspots for the Persian leopard in central country is threatened due to a proposed road to be constructed through heart of the area. 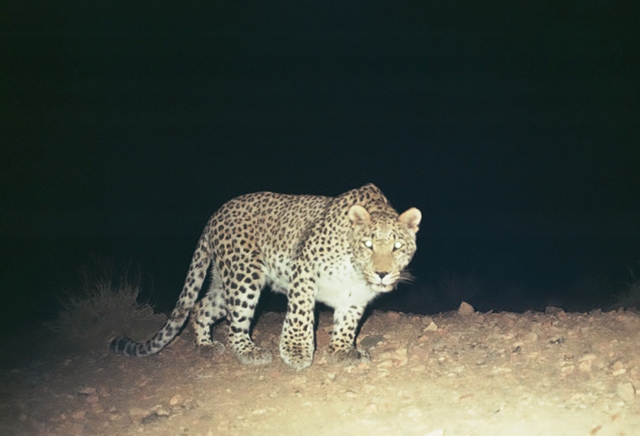 Camera trap image of the dominant Persian
leopard in Bafq

See also  Is there a new cheetah appeared in Kerman?