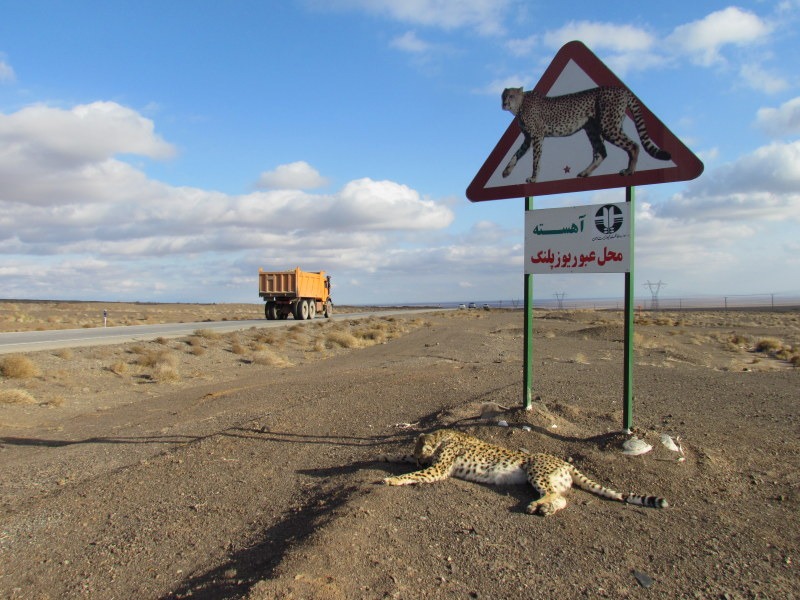 Data from Iran Department of the Environment shows that road accidents are the top cause of human-induced mortality in the Iranian network of protected areas. Iranian Cheetah Society supports a specialist group consisting of conservationists, decision makers and stake holders to mitigate the impact of roads on the Iranian wildlife.
Roads have been the major cause of mortality for the Critically Endangered Asiatic cheetahs, forming 40% of the revealed mortalities during the past decade. Just very recently, a female cheetah and its cub have been killed in vehicle collision in Semnan province, vicinity of Touran Protected Area.
Globally, impact of road on wildlife has been a major source of concern. Different solutions to reduce the negative influence of road infrastructures have been so far suggestion. The specialist group in Iran is going to review these suggestions, and formulate an action plan for Iran.
During the first meeting at Iran Department of the Environment, the group has agreed on the following decisions as the first step:
• Iran Department of the Environment will work closely with the Iranian Traffic Police to identify hotspots of wildlife mortality in main roads across the country
• A new protocol to reduce wildlife mortalities on these hotspots will be formulated and will be sent to the departments in charge of road infrastructure in Iran to be implemented
So far, five hotspots of wildlife mortality, particularly for the cheetahs, have been recognized in Kalmand-Bahadoran Protected Area, Yazd province, and Touran National Park, Semnan province. New measures will be implemented for these hotspots in order to reduce vulnerability of cheetahs and other wildlife.