Amir Firoozi Raad’s report; the reporter and photographer for Iran Student Correspondents Association (ISCA) has been published which includes his visit from a wildlife institution in MianDasht ( a town in north center of Iran) central and Koishki and also his interview with Morteza Eslami Dehkordi, the CEO in Iranian cheetah society.

ISCA: it’s time for Koishki – the protected male iranian cheetah to find his mate. The chosen female is called Delbar and she’s from Semnan (another city in the centre of Iran), but there’s another female, which is freely moving around Koishki’s town and sometimes they see each other. These meetings lead to their passion for each other. This passion will cause a wild pairing, which due to koishki’s unnatural destiny, will be accompanying his failure.
Who is Koishki and why can he not pair up?

Koishki is a male cheetah born in 2006. He was no more than just a cub when a woodman called Koishki bought him from shepherds who caught him in a trap. afterwards, Mr. koishki delivered this cheetah to Wildlife organization and that is why this cheetah is called Koishki.

Since being a cub, Koishki was kept in Pardisan park and then kept in the protected area in MianDasht. Thus he does not have the ability to last independently in the wild and in case of being set free, he cannot pass challenges such as finding water, food and shelter.
Koishki and Dalbar’s pairing up problems justify a weakness in Iran’s wildlife despite of people doing their best in order to improve it. The place where Koishki and Delbar are going to cohabit (which is the only way to save the species of these two in the fence protected carnivores) has been the topic that requires more discussions as the deadline is getting closer for Koishki and Delbar to meet each other.

There have been verbal dispute between states or even commercials about the equipments for this aim. At the first, North Khorasan and Semnan were the only nominated and also competitive states to host these two cheetahs but now Tehran has became a strong rival and it is approved that Tehran is their compulsory immigration’s destination.
To achieve this goal, a group was formed consist of Iran Wildlife organization, Iranian Cheetah society and Iranian cheetah Protection Organization. The members of this group were unwilling with Pardisan Park as the appropriate place for this goal to take place. However, after a while, regarding to Wildlife’s conclusion, Tehran was elected.
“ By now few steps were taken in order to get prepared for Koishki and Delbar’s arrival and then, the captive couple’s cohabitation” said Massoumeh Ebtkar, the presidium of Iran Wildlife. In spite of choice of Tehran, more considerations should be done about Tehran’s polluted air and its safety. Not only a year ago a deer was hunted and then shot in Pardisan Park but a Pallas’s cat was also stolen from that area. “Cohabitation is best in the nature”

Mr. Eslami bets on MianDasht as the most appropriate place for this procedure. Yet he says “ I do not recommend any place. Northern Khorasan state is officially Cheetah’s habitat and MianDasht WildLife institution was formed with the aim of studying on Cheetahs, their cohabitation and releasing the newborn cheetahs. Although the topic of releasing newborn cheetahs is a complicated process and depends on various variables.”

He declared on MianDasht WildLife institution‘s activity: “ this organization has had a great influence in the state. For instance, a cheetah was observed in Chehel Dokhtaran village and villagers instead of hunting it down, they followed the cheetah and took pictures of it. If this effort will be kept put, more positive effects will appear.” He mentioned the MianDasht site’s requirements for Koishki and Delabr’s cohabitation; “For hosting the cheetahs, this site is well supplied but for further projects, it calls for the heads of the state and governors and their corporations.”

In addition to these requirements, Mr. Eslami explains: “ In order to give birth in captivity, veterinarian monitoring equipments are obligatory. Transferring the pregnant animal to Tehran for CT and Radiology is not possible. A professional vet should also be present all the time. If North Khorasan is willing to host this program and make profit, they should spend money and also time for it. By now, only two nature rangers are working in Miandasht zone trying to protect Koishki; and the area itself is facing lack of nature ranger force.

Eslami adds:” The group’s main concept was to take the management from the Iran Wildlife organization and grant it to private sectors but this could not turn into a final conclusion. “ He says regarding to Tehran hosting: ” Tehran is supplied with better assets. Some research institutes are better and there are the possibilities people and schools visit the Cheetah.

In Eslami’s point of view, the managers’ transformation is another problem that will be caused of Koishki and Delbar’s presence in Tehran. “Having these two cheetahs very close to the instutue’s manager might make the new manager keen to make different decisions about this issue. The idea to sustenance them in somewhere else can avoid them from unexpected decisions.”

The manager of the Iranian Cheetah Society believes in deciding on this case professionally. “This topic must be summed up expertly and instead of arguments, efficient works should be done.”

The proprietors of Koishki’s destiny have chosen Delbar for him and the other anonymous cheetah from MianDasht has no chance pairing with Koishki. Nevertheless, MianDasht the Cheetah’s original dwelling gives us the chance to by setting up Koishki and Delbar’s wedding party, grabs attention and advertises the protection and serve to these animals. 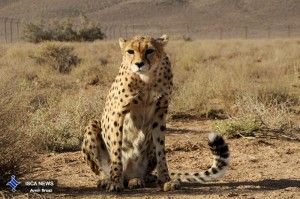