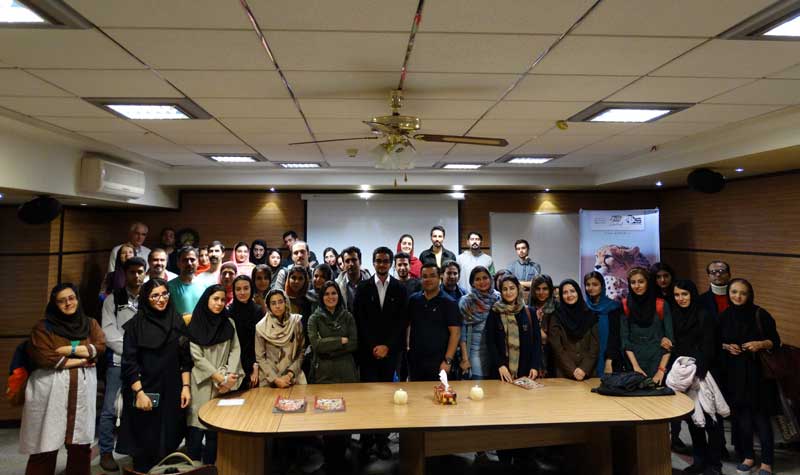 The Iranian Cheetah Society celebrated the 3rd anniversary of WildTalk Seminars, with two presentations about conservation of marine mammals of Iran and recent discoveries about a family of Iranian spiders, respectively.
In the first presentation, Hamed Moshiri from the Plan 4 the Land Society (P4L) presented some the conservation activities his NGO is involving in southern Iranian waters since 2009. Hamed showed how his team is using photo-identification techniques to identify estimate the population size of several species of dolphins. He also presented some findings from their ongoing study on the social behavior and food preferences of the dolphins. Conservation education campaigns are also one of the key complements of the work that P4L is doing in southern Iran.
Alireza Zamani introduced his work on family Filistatidae (also known as crevice weavers) in Iran in the second presentation. These nocturnal spiders typically build a silken tube in a circular pattern around the entrance of a crack, often among rocks or dead woods. Alireza updated the attendants with the most recent review of this spider family from Iran, in which to date at least 11 species from 4 genera has been discovered in the country.
In collaboration with Entesharat Fanni Publications, the Iranian Cheetah Society runs the WildTalk Seminar every two months and invites Iranian researchers and conservationists from different organizations to present their efforts to save the Iranian fauna and flora.