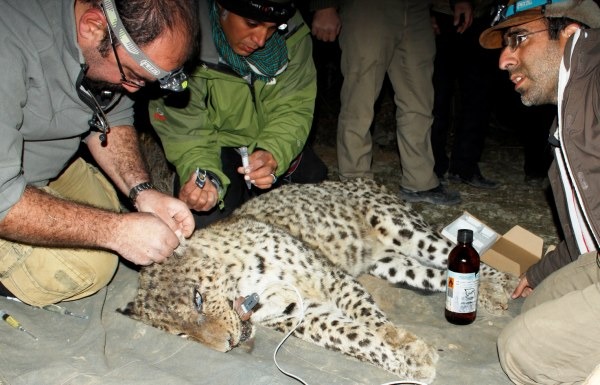 A team of vets and conservationist leading by the Iranian Cheetah Socity’s expert Mohammad Farhadinia, successfully captured a Persian leopard in a Tazeh Qal’eh village in North Khorasan province.

After a series of attacks to villagers’ domestic stock and herding dogs, the North Khorasan Office of Iran DoE asked the ICS expert and his fellow vets to capture the problem leopard.

Tazeh Qal’eh is located just near the Iranian border with Turkmenistan. The number of leopard attacks had been sharply increased during this fall, and even in two separate incidents two residents had been injured by the leopard.

The local wildlife authority had tried different traditional methods to keep the leopard away from the village, including setting fire, using torch lights, and frequently patrolling around the village. However, these efforts had been failed to reduce the leopard depredation incidents.

The captured team deployed three foot snare traps in and around the village and in less than three nights they could successfully captured the problem leopard. Early investigations revealed that indeed the leopard ages 12-14 years, one of the oldest Persian leopards so far detected in the wild. The male leopard, later name “Omid'” meaning hope, was found to lost his canine teeth and suffers from sever mouth and dental problems. The team decided to transfer Omid to Tehran where a he can receive medical treatment. Omid is now kept at Iran DoE’s Pardisan Rehabilitation Centre. The capture team and authorities believe that Omid can not be released back into the wild.