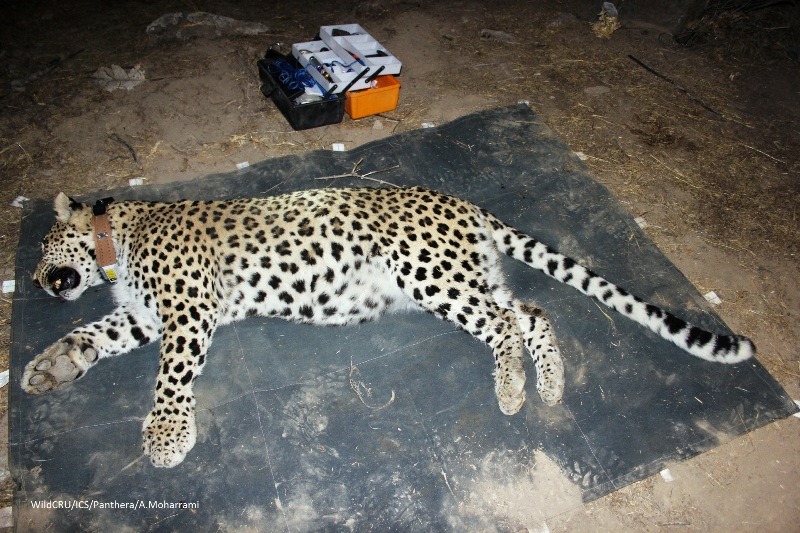 The two grown up leopards in the Tandoureh National park of are now equipped with radio collars. Both of these two leopards known to be males were captured in internal zones of the park; they got caught four nights after another in the last days of September. This research was started in the topic of Mohammad Farhadinia’s PHD thesis and is still running thanks to Eiman Memarian and Ali Reza Shahrdari the veterinarian and his colleague, Arash Moharrami as the project’s assistant and Nima Asqari to be the documentary maker. Moreover Hooman Jokar the as the professional trapper, assisted the research in the early stages.
Borna is a young 4-6 years old male leopard captured and then Bardiya, an elder leopard with the age of 8-10 years old were both supplied with radio collars. None of these two were harmed in the traps and after the anesthesia and installing the radio collars over their necks, they left the area with full health. The recorded points of the both carnivores indicate regular displacements of leopards in their area.
One of the most determinate questions about the Iranian leopards and other species is to what extent is their living area and how wide is it? Meaning that by how far their target area is given to them. During the past, a small wild nature was given leopards so it was estimated that in a small-protected area, many of them lived. For instance, most of the Environmental guards believed that Golestan Park accommodates 100-150 leopards. Until when we do not know how wide a leopard requires living in and to what extent they exceed their borders, we cannot define a certain population for leopards. Undoubtedly, use of radio collars can answer the question marks.

Not only that, but also this project also aims to analysis leopards’ health situations. Nowadays, various diseases threaten wildlife, but our knowledge over these diseases especially about carnivores is limited. The internal and external viral parasites such Feline Pan leukopenia or FIV are the most important issues which will be investigated amongst the captured leopards.

This research with the aim of investing their movements in the border of the protected zones and beyond the borders, evaluating whether the borders are efficient enough or not for leopards’ long term survival, investing the chance of their trans boundary movement from Iran to Turkmenistan, medical investigations and assessing the health care each individual leopard in point of view of parasites, viral diseases and ecological investigations is be doing.

Regarding the international standards, the radio collars should not weigh more than 3% of animal’s weight so that no side effects will be observed in leopard’s behavior or its movements. Fortunately by heavy researches and calculations with radio collar production company, the mass of used radio collars do not exceed 1% of leopard’s weight. The batteries inside the radio collar last for more than one year. The GPS inside the radio collars turns on 8-24 times a day to record where the leopard is present at the moment. The radio collars have no sound and last for a limited time. Another perspective of radio collars is that they automatically get opened after one year so there is no need to capture the animal and anaesthetize it again. Not only a dot, a 3D space is estimated in one set of five minutes a day to document leopard’s everyday life activity. Later on, by analysing this data, we will figure out the energy needed for each leopard’s required energy for activities per day and how much they spend.

While getting close to the villages, the radio collars will inform the researcher and the rate of points withdrawn will increase once per an hour. In this case we can ensure that how the leopard reached the village and whether it put any efforts to attack the livestocks or not. During all these actions, the Foam inside the radio collar protects the neck from any pressure of the radio collar.

It should be noted that Dr. Mohammad Farhadinia as a member of Iranian Cheetah Society holds the management and research seat in the organization.
In case of being willing to get the news and reports over these two leopards, you are welcomed to visit our Facebook page and join the events.